THE WAY I REMEMBER IT

Austin's Economic Development Council (A project of the Austin Chamber of Commerce) had been formed in 1961 and a program launched to attract "clean industry" to Austin. Assisting me on the C of C staff was Tom Perkins, who also handled Tourism promotion, and almost anything else handed him. In 1966 I was able to hire a full time Economic Development Department Manager. This was John Gray, who, in my opinion, turned out to be the best in the country. If measured by results, I know he was.

Just after John joined us, Hub Bechtol, an Austin real estate professional and friend, brought in a packet requesting extensive information about Austin. All Hub could tell us is that it was for an industrial prospect. The next morning another good friend, Dan Crowley, brought in the same packet with the same explanation, and just as Hub, requested complete secrecy. These requests came about once a week for an extended period of time. Each time Hub brought one in, the next day Dan brought one in.

It was obvious to John and I that the requests were coming from the same source. We were happy that they were identical since most required additional research. But we wondered, since we were to provide the information in complete secrecy, should we let Hub and Dan know? Our dilemma sort of solved itself one day when both appeared at John's office at the same time, carrying the same packet in a large white unmarked envelope. John asked me to join them in his office. Both men were discreetly trying to hide their envelope. When I arrived, John simply pointed at them, and I shook my head "yes."

We told them how the packets had been arriving - Hub one day and Dan the next. Hub was working for the Law Firm Kilgore, Lockridge, etc. Dan was representing the gas company, but his packet was sent to headquarters in Dallas. It was then sent to him the next day. Hence, the one day delay.

After a few months of this activity, an individual appeared at our office who said he represented the company that was requesting all the information. He identified himself as "Gene Tunny," and then smiled broadly. He was in Austin verifying some of our information, and physically looking at the city and area.

One fine day in 1967 we were invited to a news conference at the Commodore Perry Hotel (Austin's finest) located at 8th and Brazos. It was apparent that all the city VIP's had been invited along with the press. Charles Muller took the podium and announced that IBM had evaluated all of the criteria, and was going to locate a plant in Austin. Charles was to be the plant manager. They were to manufacture the Selectric typewriter. Austin was in the high-tech age!

My Chamber Board showed great patience in our effort to attract the "right" kind of industry to Austin. From the time that I started the Economic Development effort until we announced the IBM plant was ten years. I am grateful for their patience. After this announcement, it was much easier for us to get an appointment to see the key people at other prospective industries for Austin. Results were also faster in coming. 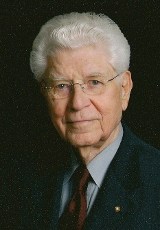